While there has been a lot of fear, uncertainty and doubt (FUD) in the market over the past few weeks, investors appear hopeful about the future of DeFi. According to a new report, US$6.5 billion has been poured into the space over the past 12 months, far outstripping the second most-backed space of fintech.

Although some investors have run to DeFi others are running to DOGE...

Dogecoin (DOGE) continued its two-week rally, climbing another 6% in the last 24 hours, and at the time of writing is up 25% week-on-week. The ongoing rally is likely fueled by unconfirmed rumours that the meme coin could become part of Twitter's potential plans to launch its own payment system.

Wrapped Bitcoin (WBTC), the Ethereum network's leading wrapper for Bitcoin, has continued to trade at a slight discount to bitcoin since mid-November. The discount appears to have been sparked based on data from Messari's dashboard on Dune Analysis, which says FTX's sister company, Alameda Research, was a top WBTC merchant by the number of tokens minted.

And BlockFi, the latest crypto casualty following the FTX collapse, has filed for Chapter 11 bankruptcy protection in the United States.

BlockFi had been on the verge of bankruptcy and had announced two weeks ago that it was considering filing for bankruptcy. It also halted withdrawals and restricted platform activity.

This isn’t the first time the lender has been on the brink of bankruptcy, FTX saved it from near-bankruptcy in June this year.

And just as you thought it couldn't get any worse for Sam Bankman-Fried (SBF), the CEO of BlockFi is now suing SBF to obtain his shares in Robinhood.

Bitcoin (BTC) has not done much in the last seven days with a smaller body range and Doji candles with below-average volume. Doji candles usually mean that the market is in equilibrium and not sure in which direction it would go next. One thing that was clearly visible was a huge drop in volatility where the Average True Range (ATR) dropped from 4.53 to 2.63. This low volatility is very similar to the prior break of major support on AU$25,500.

For the bulls, there is a possibility that BTC is under accumulation between AU$23,000 to AU$25,000. To prove if this is the case then it needs to break its resistance at 21 day Exponential Moving Average (EMA) of AU$25,500 and 50 day Simple Moving Average (SMA) with above-average volume. 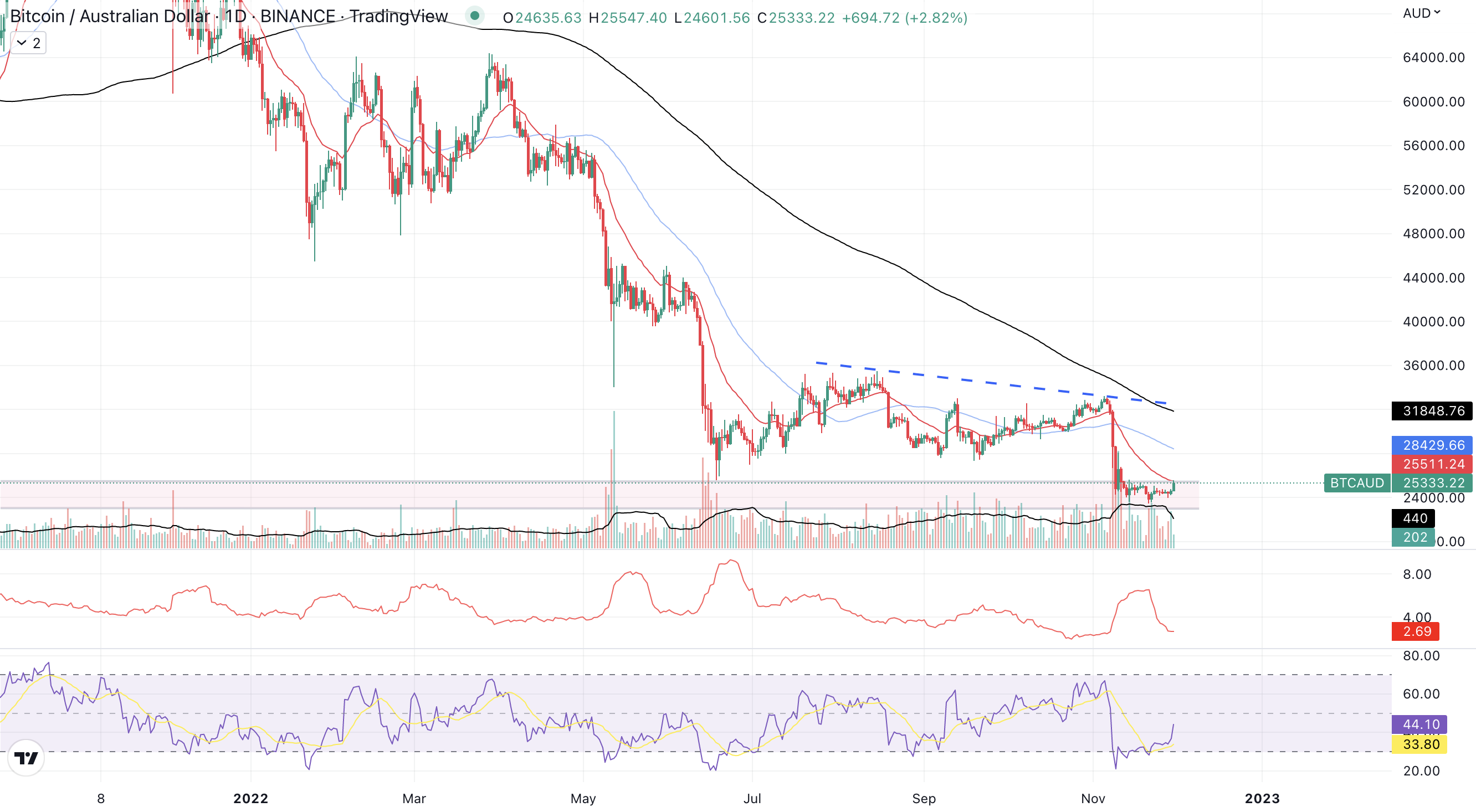