Bitcoin’s drop in price has caused the mining sector to reduce its inventories including BTC mining company Bitfarms, which announced that it has sold 3,000 BTC for around US$62 million over the past several days. While this news may usher negative sentiment amongst some readers, the news comes as the increased selling pressure has been met by an upside reaction, which could indicate the formation of a new price range.   In addition to this is another viewpoint, bitcoin’s production costs. Bitcoin relies on an energy-intensive process to generate new coins, which makes mining not cheap. The cost to produce a bitcoin is estimated to be at its lowest, US$20,260 which is not far from its current USD value of $20,491. This means that for many miners, the cost to produce VS sell could almost be unprofitable. Satoshi had this idea in 2010 stating that “... the price of any commodity tends to gravitate toward the production cost. If the price is below cost, then production slows down. If the price is above cost, profit can be made by generating and selling more. At the same time, the increased production would increase the difficulty, pushing the cost of generating towards the price.” So could Satoshi have known what bitcoin’s bottom would be?

Solend Community Vote to Take Over Whale’s Account Solend, a decentralised lending protocol based on the Solana network, narrowly escaped liquidating 95 per cent of its lending pool's SOL deposits over the weekend. A whale borrower was at the core of the controversy, with an outsized presence on the lending protocol and control over the vast majority of the SOL coins within it. The loan risked being liquidated as the price of SOL tanked last week, which would have caused chaos for the lending protocol and the Solana network due to a rush in buying up cheap SOL. Rooter, the co-founder, even proposed that the account be taken over so that the collateral could be sold in an orderly manner that didn't jam (and perhaps down) the Solana network. The community, however, overturned the idea after voting in favour of it. The whale later moved some of their debt off the protocol to another lending protocol.

With further selloffs seen across global financial and cryptocurrency markets, we’ve seen some interim stability building around AU$27,500 with bitcoin bouncing as much as 15%, if you picked the absolute bottom. It’s hard to say whether this is a true bottom or if it’s more of a dead cat bounce.

Given the current condition of the markets as a whole, we are really in uncertain territory. Many government bonds are currently yielding in excess of 8%, which is never a good sign of the state of the economy as a whole.

Many cryptocurrencies have been seen as a hedge against inflation. It will be interesting to see whether any negative effects on core asset classes result in more large enterprises or even governments moving towards digital assets as part of their own hedge. Either way, those are wheels that grind slowly and may not see any immediate effect on the market in the short term. 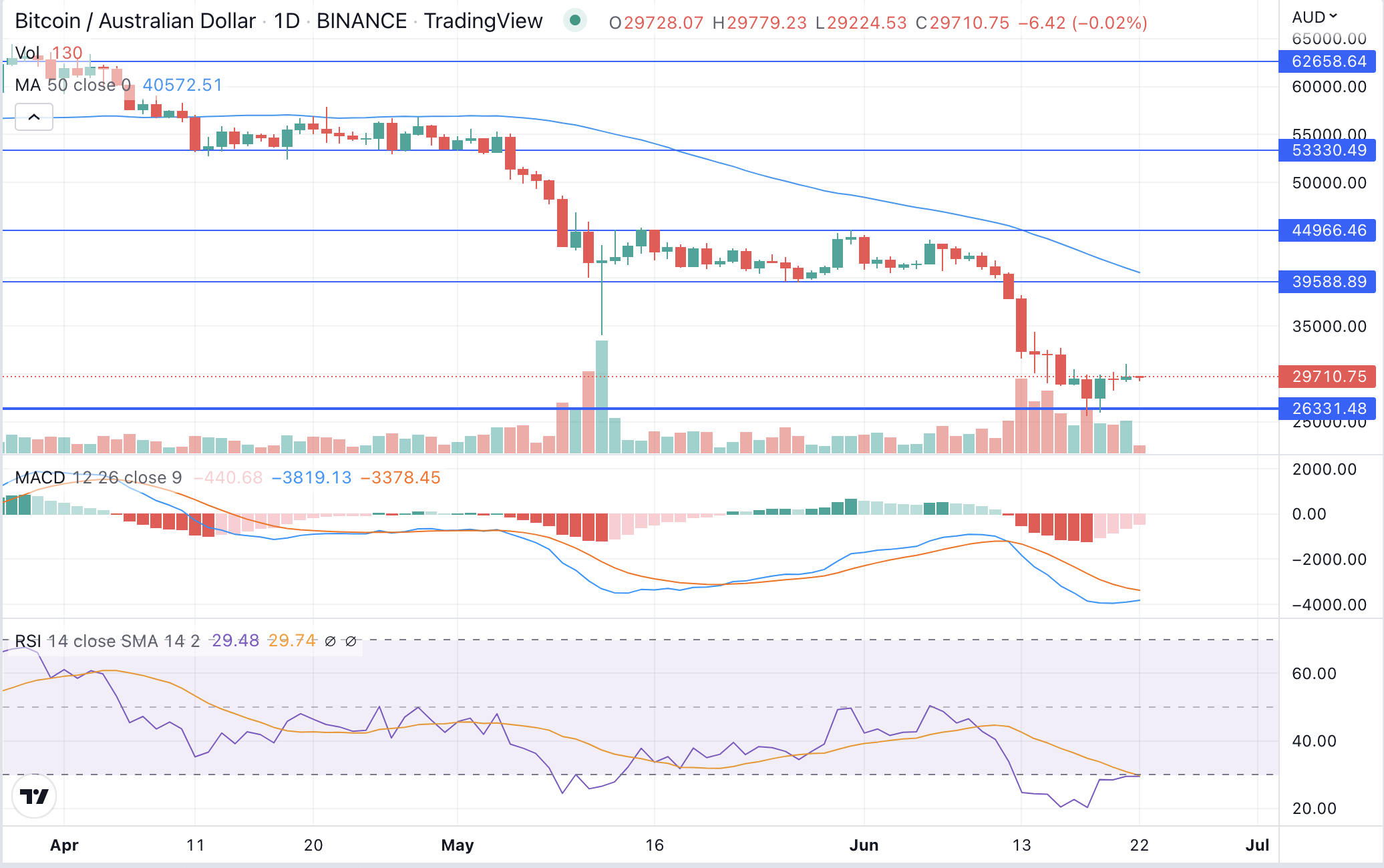 What I would be hoping for as a trader is to see some stability form and see the market build a base that one can trade from. Indicators are still bearish but are showing signs of relaxing a bit. We may even see some bullish crosses if the market continues on its current trajectory. I would however be cautious given the overall state of things right now. On another interesting note, while data has shown cryptocurrency miners have offloaded a lot of their accumulated BTC from their mining rewards, the tide seems to have turned and they are back into accumulation mode.