Is the fearful sentiment a buy the dip opportunity?

This week the Bitcoin mining hash rate hit an all-time high, yet as you can see in the crypto fear and greed index, the market sentiment is now showing extreme fear. As a result, bitcoin is down 4.2% over the week, while many other layer-1s are down by double-digit percentages. In contrast, Near Protocol bucked the trend and is up 27%.

What’s driving the fearful sentiment? Multiple asset classes have dipped recently, indicating the move could be part of a broader macro trend.

If you’ve seen the “money printer go brrr” meme featuring US Fed Chair Jerome Powell, then it’s easy to see where the fear is coming from. The Fed has been furiously spinning his money printer since the start of the COVID19 outbreak. Now, they’re slowing down that money printing — with plans to stop completely by March and potentially hike interest rates in 2022.

Why now? With US inflation pushed to a near 40-year 6.8 percent high in November, the Fed is looking to slow inflation by tightening economic conditions.

Is bitcoin an inflation hedge?

Monetary inflation is an increase in the money supply (e.g. money printer go brrr). Since the Fed massively increased the money supply since the start of the pandemic, bitcoin has increased ~650%, indicating that many believe in the cryptocurrency’s hedge against inflation narrative, afterall, while the Fed can print an unlimited supply of dollars, there will only ever be 21 million bitcoins.

However, there’s another type of inflation called ‘core inflation’, which is price increases in goods and services — that’s what we’re seeing now. If the Fed’s response to core inflation is to slow the money supply, it’s possible that we see a drop in asset prices, including crypto. Although, if asset prices dip too much, then the Fed may be forced to accelerate printing once again.

In the short-term, some traders taking profits are moving to stablecoins like USDC while others (including Microstrategy) are seeing it as a buy the dip opportunity.

Bitcoin (BTC) is seeing a continued downtrend this week, closing down 4.24%. That percentage more than doubled at times, with losses of 9.76% at the lows. However, it bounced back pretty much every day to make the losses a little less severe.

With inflation concerns not only rocking the crypto market but also markets around the world, it should be noted that bitcoin has held on reasonably well. As with any investment, I’m sure many who bought at or near the tops are feeling the pressure and uncertainty around their positions, regardless of what the underlying asset is. 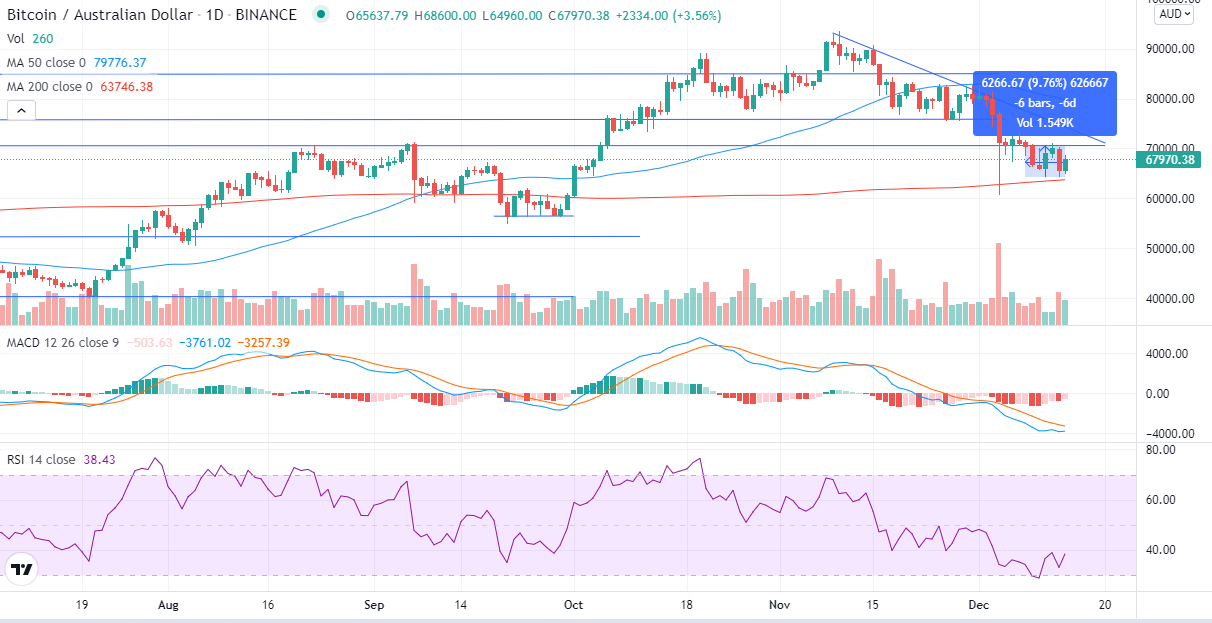 On the technical front, BTC is flirting with the 200 day Moving Average (MA). Crossing the 200 day MA is usually a very bearish signal and may well see some people reacting to this by closing out positions. However, looking at recent examples, we saw more of a sideways move for bitcoin followed by another upwards push. Will this happen this time? Only time will tell!

Either way, it will be a move I’ll be watching with keen interest.

Looking at the key technical indicators, the Relative Strength Index (RSI) briefly hit oversold and is still sitting in the oversold area while the Moving Average Convergence Divergence (MACD) is very much bearish.