The world was abuzz with excitement as the bitcoin halving event stole headlines. The supply-cut experienced every 4-years happened early yesterday morning, capping off a largely positive week that saw bitcoin peak at $15,500 AUD, before a sharp sell-off.

At the time of writing, bitcoin sits at $13,332 AUD, falling as low as the high $12,000 area overnight. The $2,000 drop yesterday was similar to previous downward moves seen before, or after the first two halvings. The move bounced precisely off the 0.618 Fibonacci retracement level and is testing support around $13,000 AUD. The powerful move to $15,500 AUD coincided with news that legendary investor, Paul Tudor Jones, had bought bitcoin, and price dipped as soon as his interview on American television finished just prior to the halving.

Since the March stock market crash, bitcoin has been in a clear uptrend and still holds inside an upward channel after this correction on the daily. While it’s possible bitcoin can build here for another hard push on the multi-year resistance level of $15,500 AUD, it’s more likely we see a period of consolidation above the 200 EMA and on the 0.618. Price could easily retest the $12,000 lows before resuming up the channel.

As bitcoin’s halving stole the show this week, some altcoins saw positive moves in its shadow. Ox is up by 80% over 7-days, augur token 20% and neo 12% at the time of writing. 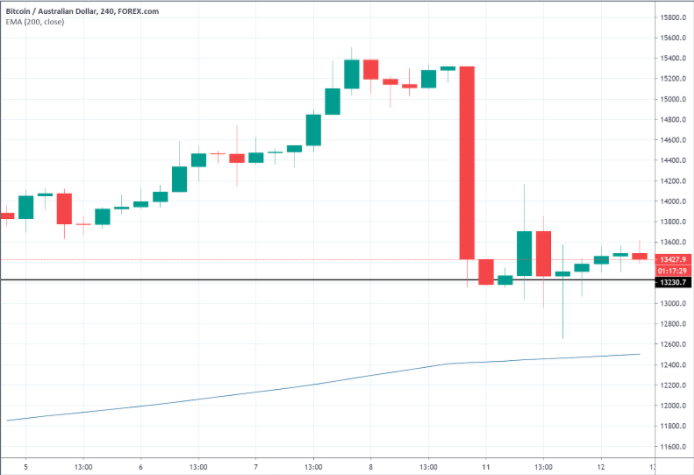