At the time of writing, bitcoin sits at $13,916 AUD after an exciting up-thrust to $14,000 AUD. The positive move topped off a week where bitcoin appears to be grinding higher.

In light of last week’s aggressive drop to $13,000, you could’ve been forgiven for thinking bitcoin wanted to head lower, however, in good news for bulls, bitcoin made a series of higher lows and created an ascending triangle pattern with $13,800 as the ceiling.

Bitcoin broke the heavy resistance level of $13,800 where the 100 EMA had blocked any move higher, and it also signalled a breakout of the ascending triangle. While the rally briefly wicked into the area above the $14000 level, price was forced back down. A positive sign for BTC on the 4hr charts was a pullback to the ceiling of the triangle and a nice retest of the 100 EMA which may signal another run to $14,000. The bears seem to have their work cut out for them if they cannot get beneath the 100 EMA or force a lower high on the daily, but if bitcoin looks weak near $14,000, look for sell pressure to come.

While a slow grinding market can often be uneventful, bitcoin appears to have been buoyed by rumours that PayPal and Venmo are launching cryptocurrency support for their 300m + users, and it will be fascinating to see if this aids the rally further, or if it peters out. In the broader market, a handful of cryptos saw gains over 7-days. Chainlink moved up by 21%, bat token 13%, and iost found legs, up by 17%. 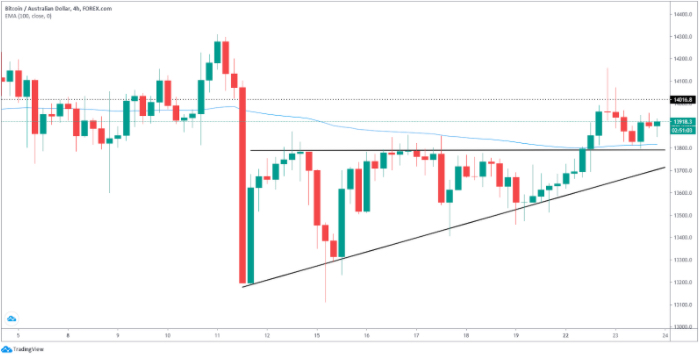