Home Learning Hub What Are NFTs in Crypto? The Future of Property Rights for Digital Art, Music and Gaming

What Are NFTs in Crypto? The Future of Property Rights for Digital Art, Music and Gaming

Is it art? Are you buying a jpeg? What are NFTs in crypto? An NFT is a digital asset that gives you ownership of art, music, and in-game items. But they're so much more.

It’s clear that NFTs tap into the cultural psyche. Now, their utility is growing exponentially as digital experiences are built around them, including virtual worlds, games, social networks and art marketplaces.

So if you’ve ever wondered why anyone would pay $3 million for a picture of a rock, keep reading, because we’re going to explain what NFTs are and why they matter.

What are NFTs in crypto?

NFTs are records of who owns different pieces of digital media, such as art, videos, music, gaming items and even memes. These records are stored on the blockchain, making them immutable, verifiable and secure. Anyone can create them, trade them and own them.

There’s a more technical explanation. NFTs are non-fungible tokens. ‘Non-fungible’ means that they’re one of a kind, unlike bitcoin, which are interchangeable, for example, you can break down bitcoin into thousands of satoshi, however an NFT can’t be. In crypto, a ‘token’ refers to an entry on a blockchain that verifies you’re the owner. So an NFT is ownership of a unique token that’s verified by the blockchain. Then again, the technical explanation misses the point, much like explaining an mp3 as an MPEG Audio Layer-3.

Essentially, an NFT is a way to verify ownership of digital items. It’s a title that lets everyone know that we own that particular song, in-game item, art, or other digital assets. Let’s take a look at some of the most infamous NFTs.

NFTs have evolved since the early days of the infamous CryptoPunks and Ether Rock. There are now NFTs of generative art, avatars, land in virtual worlds, collectables, music, and even memes. Let’s take a look at some of the most popular projects. 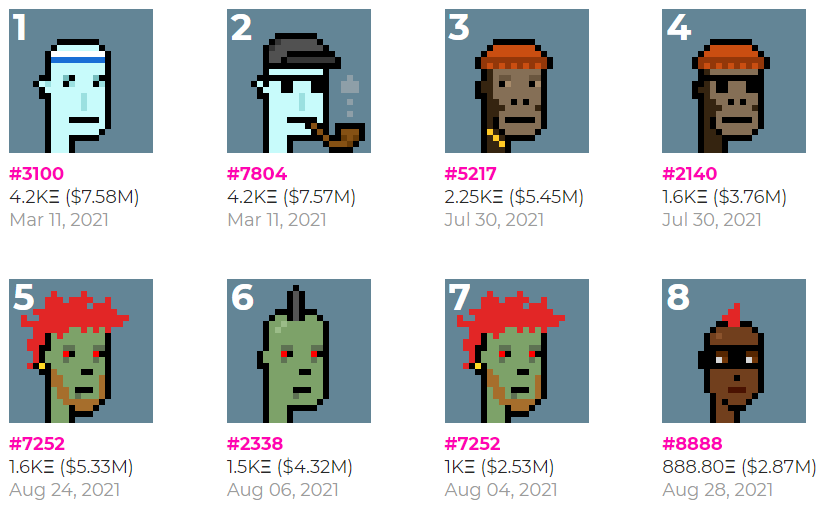 CryptoPunks inspired the crypto art movement. Minted on Ethereum in 2017, many consider them first editions of the NFT world, which gives them a massive price premium. The 10,000 unique crypto punks have now traded for over one billion dollars, with the highest sale for an individual punk being for AU$10 million. Even Visa purchased a CryptoPunk, paying over AU$200,000. 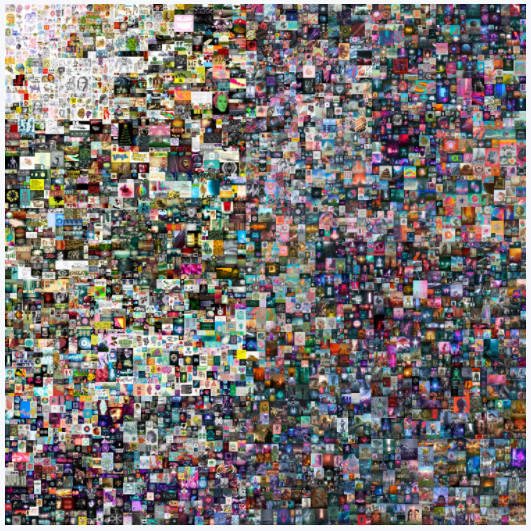 The artist Beeple sold an NFT for AU$95 million. His NFT featured 5,000 individual pieces of digital art collated into one digital mural. It was the third-highest auction price achieved for a living artist, after Jeff Koons and David Hockney.

Generative art is made using algorithms written by an artist/ programmer. When a token is minted, a new piece of art is created. They have already been sold at the infamous Sotheby's auction house. Many are worth millions of dollars. 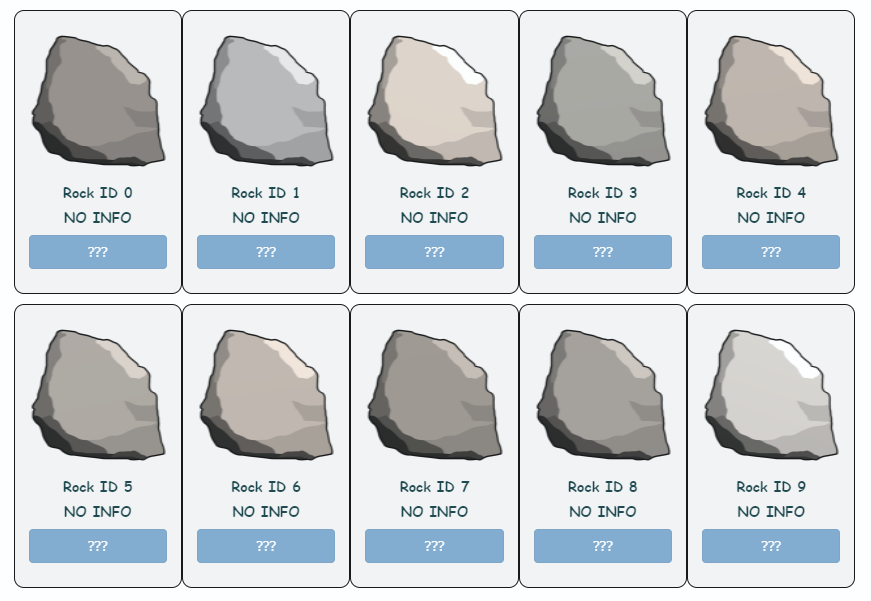 Launching shortly after CryptoPunks in 2017, Ether Rock was an early NFT project on the Ethereum blockchain. There are only 100 rocks available and one just sold for AU$1.8 million. It has left many people gob-smacked that someone would pay that much money for a jpeg of a rock.

Nyan cat is a famous internet meme that was turned into an NFT. In an online auction it sold for 300 ETH, worth over a million dollars today. Other memes that have been sold as NFTs include Bad Luck Brian, Success Kid and Charlie Bit My Finger. And there are many more crypto memes that could be made into NFTs.

CryptoKitties is a blockchain game on Ethereum that lets players purchase, collect, breed and sell virtual cats. Each cat is one-of-a-kind and cannot be replicated, taken away, or destroyed. The rarest have sold for hundreds of thousands of dollars each.

NFTs remove rent-seeking intermediaries for artists, musicians and other creators by giving them direct access to their fans. This gives musicians more power. Instead of record labels or centralised streaming platforms taking a huge cut, artists can receive 100% of the product for their work. We’ve already seen this trend emerge with the growing success of Audius, which has already been incorporated into TikTok. 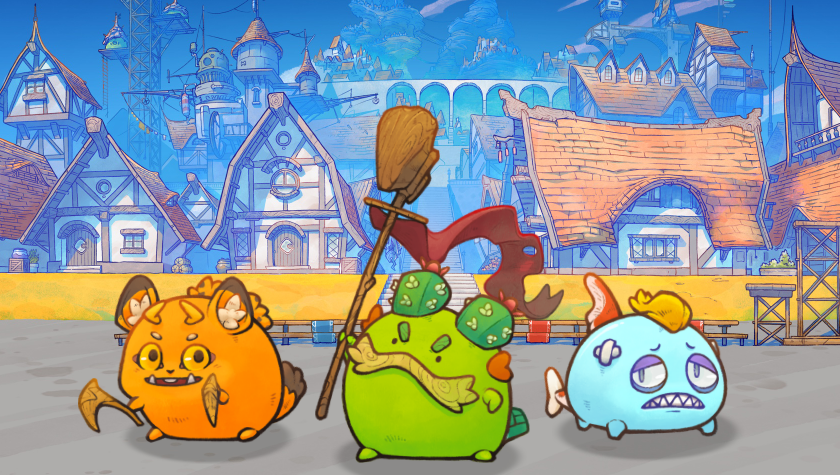 NFTs can be used to represent in-game assets, such as digital plots of land, which are controlled by the user instead of the game developer. NFT games allow assets to be traded on third-party marketplaces without permission from the game developer. A piece of land in Axie Infinity has already sold for over AU$2 million, putting Melbourne and Sydney housing prices in perspective.

The same kids who grew up trading baseball cards at recess, are now trading NBA Top Shots on their lunch break from work. Virtual packs can be purchased and either 'showcased' or re-sold. You're buying versions of specific, officially-licensed video highlights. Many are already reselling for hundreds of thousands of dollars. 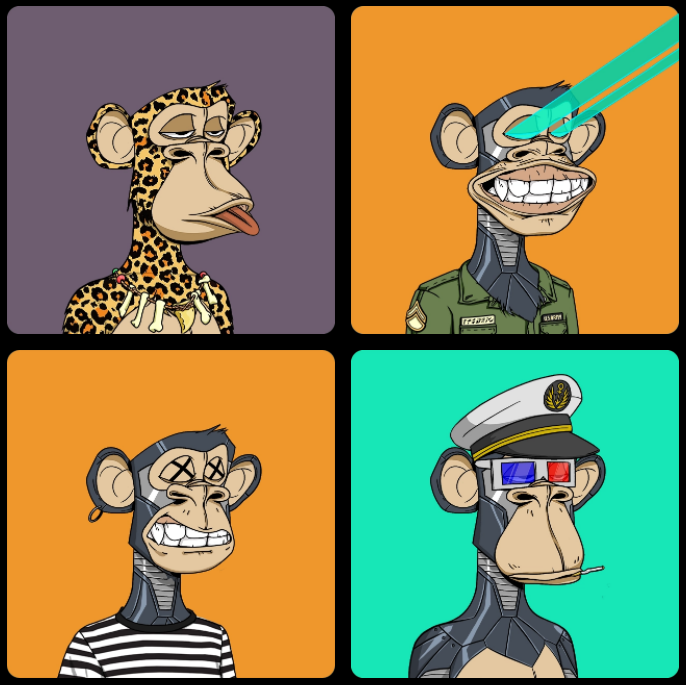 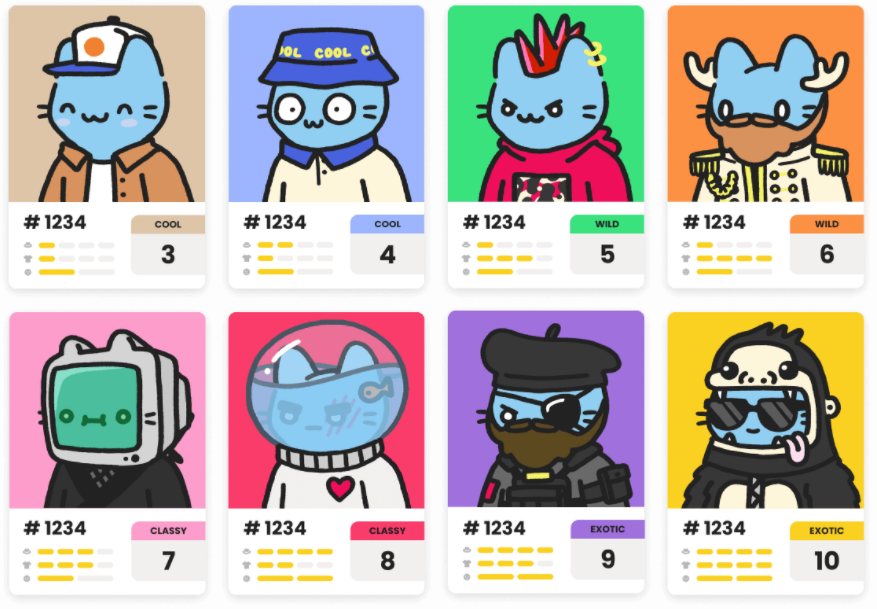 There are 9,999 Cool Cats, each with a unique style and outfit. TIME magazine is working with Cool Cats to release 400 quirky Cool Cats illustrations reading the magazine. Already, many Cool Cats are selling for hundreds of thousands of dollars. What a crazy time to be alive!

World of Women is helping bring more females into the NFT space, with a collection of unique, cool and diverse Women — randomly generated digital collectibles. When you own a Woman, you will receive 50% of any royalties generated from commercial use. 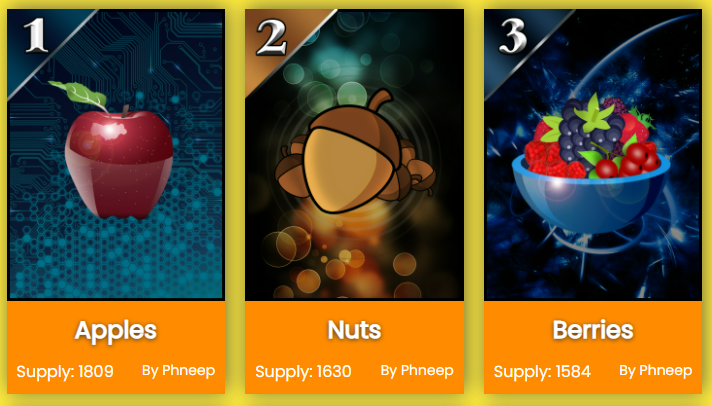 My Curio Cards were even earlier than CryptoPunks. They’re considered the first known NFT art project on Ethereum blockchain. The famous Christie's auction house will be selling a full set of the cards in New York City.

We made the conceptual leap from physical gold to ‘digital gold’ with bitcoin. Why can’t we make the same leap for other physical objects? We already can see there’s a difference between the physical value of something and its abstract value. So if you can appreciate someone willing to pay millions of dollars for a baseball card, you’re well on your way to understanding NFTs.

As the venture capitalists, Marc Andreessen and Ben Horowitz, shared on Clubhouse;

Baseball cards became a collectible that fans would buy and trade. The Honus Wagner baseball card is rarer than most, since after being a rookie, he didn’t permit any more cards to be made because the cards were linked to cigarettes. As a result, there are less than two hundred Honus Wagner cards, so they’re much rarer than most. Much like gold, it gets part of its value from being scarce.

Now, consider what you get when you buy a Honus Wagner baseball card. You don’t own Honus Wagner, you aren’t paying for a royalty stream, and you don’t get commercial rights. And yet people buy it. Clearly, they buy it simply because they want to own it. Humans have been collecting things for thousands of years, why would we change now?

But who would actually pay millions of dollars for a baseball card? Well, let’s consider the example of Wayne Gretzky, the greatest ice-hockey player of all time. He purchased a Honus Wagner card for $451,000. Why not buy a house with it? With a net worth of over $250 million, Wayne Gretzky has his material needs covered for the rest of his life many times over. In crypto, it's no different. Many developers, investors and traders have gotten fabulously wealthy. Like Wayne Gretzky, they want a memento too.

Clearly, we have already abstracted value from the physical to the cultural. Now we can abstract the culture to the virtual, separating the value of the atoms and the information. NFTs take this phenomenon to the scale of the internet.

Where does the value of art lie? An experiment by Damien Hirst

Damien Hirst is an English artist that completely dominated the art scene in the 90s with a series of works that featured a tiger shark, sheep and cow, all preserved in formaldehyde. It has made him the United Kingdom’s richest living artist, with his wealth estimated at AU$525 million.

Damien Hirst has long been fascinated by the intersection of art and money. When he created a piece, a human skull covered in diamonds, it sold for $100 million. Was it worth $100 million for the art? Or for the diamonds?

Now, the growth of NFTs has made him question where the true value in his artwork lies. The Currency is Damien Hirst’s latest work. As Matt Hougan, the CEO of Bitwise summarised, Hirst created 10,000 paintings of dots and then placed them into a vault. Next, he auctioned off an NFT for each painting.

Here’s where it gets interesting. After one year, the owner of the NFT must choose between the NFT and the physical painting. They get to keep the one they choose, while the other gets destroyed. This makes buyers choose, where does the value of the art lie?

Ultimately, while the original owners make the first choice, the market will determine the long term value. Damien Hirst’s physical paintings have been worth a lot of money. However, it’s likely that the NFTs will be worth more as they have more cultural significance — much like Banksy’s painting that became worth more after it was shredded.

Regardless of which is more valuable, it shows that the traditional art world recognises that NFTs are much more than just jpegs. Much like the Mona Lisa, there’s more to NFTs than meets the eye.

How to get exposure to NFTs?

You don’t have to invest hundreds of thousands into CryptoPunks to participate in the growth of NFTs. While NFTs can be fun to buy, and are a great way to support creative artists, they’re much harder to evaluate as a financial investment. Luckily, there are other ways to get exposure to the NFT ecosystem right here on Cointree.

Here are four coins that will give you exposure to NFTs:

While many see NFTs as an exciting investment opportunity, their greatest impact will be on culture at large. In ten years time, it’s likely that we’ll look back and see NFTs as the key catalyst for moving culture into virtual worlds, digital communities and online art galleries. NFTs are paving the way for the metaverse.

Investing in bear markets? In this article, we'll walk you through four strategies and mindsets that can help keep you safe.

What Is the Ethereum Virtual Machine (EVM)? Key Crypto Infrastructure

How to Evaluate a Defi Project

How to evaluate DeFi protocols? In this guide to evaluating a DeFi project, we cover everything from the fundamentals to key DeFi metrics.