Home Learning Hub How Much Energy Does The Bitcoin Network Really Use?

How Much Energy Does The Bitcoin Network Really Use?

As bitcoin has rapidly increased in price and popularity, many people outside of the crypto community have become increasingly concerned about the amount of energy the Bitcoin network consumes.

Considering that the Bitcoin network uses less energy than the amount we collectively use on Christmas lights, many of these concerns are overblown. Still, it’s worth diving into the details and exploring how Bitcoin isn’t only using renewable energy — it’s driving the entire green energy industry forward.

How is Bitcoin’s energy use calculated?

It’s relatively simple to calculate Bitcoin’s energy use. While the following is an oversimplification, it gives us an overview of the exact process.

First, you can simply look at the hashrate to see the total amount of computational power that the network is using. Then, you can look at the energy requirements of the Application-Specific Integrated Circuit  (ASICs) that Bitcoin miners are using to generate that hashrate. Finally, you can calculate the energy these computers require to produce the current hashrate.

You can see the current energy use with the Cambridge Bitcoin Electricity Consumption Index.

Why do Bitcoin miners use energy?

Bitcoin mining was specifically designed to consume lots of energy. It’s a feature, not a bug. Before a Bitcoin miner can publish a new block of Bitcoin transactions, they must first expend lots of energy guessing the correct answer to a cryptographic puzzle (complex math problem).

Because they’ve invested lots of resources into the network, this incentives Bitcoin miners to only publish correct transactions and act in the best interest of the network. Ultimately, the more energy the Bitcoin network consumes, the more secure it is.

No. Even if Bitcoin becomes the world reserve currency, then its energy demands for transactions will not rise at the same pace. That’s because Bitcoin transactions don’t use anywhere near as much energy as Bitcoin miners use to secure the network. Furthermore, layer 2 solutions like the Lightning Network and exchanges like Cointree significantly reduce the number of transactions on the main Bitcoin blockchain.

In fact, as Bitcoin transactions scale, the network becomes more efficient because you can add more economic value within every block.

How does Bitcoin’s energy usage compare to the traditional financial system?

While Bitcoin does use a lot of energy, it should be kept in perspective. Currently, the Bitcoin network uses less than half of the energy consumed by the traditional financial system. It’s also using less than half of the energy of the gold industry too. Moreover, as Bitcoin grows, it’s set to become more energy efficient as layer 2 solutions like the Lightning Network mean a greater number of transactions are processed with every block.

What countries mine the most Bitcoin?

In the above graph, we can see the United States (35%), Russia (11%), and Canada (9.5%) are mining the most bitcoin. This is to be expected as they are all large countries with abundant energy sources, including renewable energy sources. 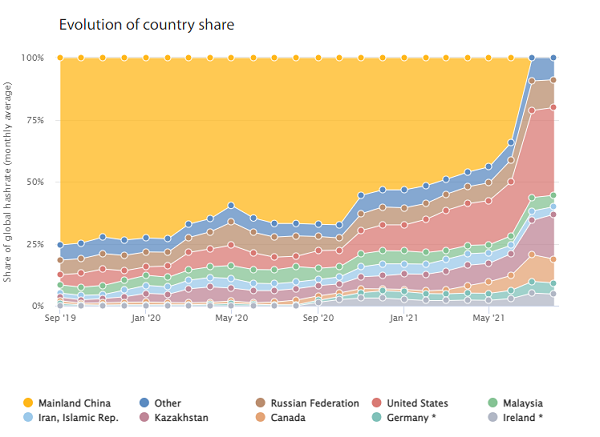 The above graph clearly shows how China used to dominate Bitcoin mining. Since the Chinese mining ban back in May 2021, we can see the percentage of mining in China shrink to zero. The United States has taken over the majority of the mining power, while most other countries remain at a similar percentage. Notably, the bitcoin mining hashrate hit an all-time high in early 2022, showing that the Bitcoin network has more than completely replaced the lost Chinese miners.

Does Bitcoin use renewable energy?

Already, at least 39% of the energy used by the Bitcoin network comes from renewable sources such as hydropower. Not to mention, another report put that figure much higher, at 73%. Regardless of which figure is correct, they’re both a much higher percentage than banks or tech companies use.

Furthermore, as the University of Cambridge reported, 62% of global miners rely on hydropower for at least some of their electricity and about 39% use at least some combination of solar, wind, or geothermal.

Now, the Bitcoin network is looking to become even more reliant on green energy. The nation of El Salvador launched a billion dollar bond that will be used to build a geothermal power plant, used to both mine Bitcoin and help power the nation with 100% renewable energy.

As Bitcoin can be mined anywhere in the world, it’s easy for miners to move to locations abundant in green energy. Along with the geothermal energy from El Salvador, miners are using flared natural gas from oil refineries that would otherwise go to waste.

With the Bitcoin network not only using renewable energy, but actively investing in its infrastructure, Bitcoin may actually be a driving force for the green energy network over the long term.

Investing in bear markets? In this article, we'll walk you through four strategies and mindsets that can help keep you safe.

What Is the Ethereum Virtual Machine (EVM)? Key Crypto Infrastructure

How to Evaluate a Defi Project

How to evaluate DeFi protocols? In this guide to evaluating a DeFi project, we cover everything from the fundamentals to key DeFi metrics.